by Deborah Walike Special to the Jewish Times
Baltimore Jewish Times - December 6, 2002
Victoria Polin says she wishes there was some kind of award she could bestow upon Beth Tfiloh Community School.
An alleged sexual predator was stopped Nov. 21 when the Jewish day school in Pikesville alerted authorities about Adam Theodore Rubin, a former teacher and coach who was arrested and charged with soliciting sex on the Internet from a 13-year-old female Beth Tfiloh student.
Ms. Polin says she wants local Jews to study and discuss the case over and over again.
"Right now, because Beth Tfiloh had an incident, it's an ideal time to get in," said Ms. Polin, who is developing an international Jewish organization to combat childhood sexual abuse and support survivors. "It is the time to teach kids about 'good touch, bad touch,' and we should honor those girls who came forward to tell the authorities. Now, what you should do is grow with it. It happened and the community should say, 'We won't let it happen ever again.'"
An Upper Park Heights resident, Ms. Polin has professional experiences with such cases as rape, incest, sexual abuse and domestic violence. Besides being an art therapist, she is a licensed clinical professional counselor recognized by the state of Illinois who is working on her Maryland licensure. Ms. Polin said that attention to reports of possible sexual improprieties is a rare occurrence. In the alleged sex abuse by Mr. Rubin, Ms. Polin said Beth Tfiloh's staff did all of the right things. They believed the child's story, listened to her parents and called the police.
But normally, Ms. Polin said, possible child sexual abuse goes unnoticed for a variety of reasons.

Schools, agencies and child care facilities are reluctant to report their suspicions because of liability in possibly falsely accusing an innocent individual. Many administrators, she said, are more concerned with the reputation of their facility and will "hush-up" a problem. Most importantly, Ms. Polin feels that almost all organizations suffer from a lack of basic education on the signs of sexual abuse and how to deal with it.
Since Ms. Polin has only been in Baltimore for a year, she said she does not know if any local Jewish facilities have training for recognizing, reporting and providing therapy for sexual abuse survivors. For this article, the Baltimore Jewish Times interviewed administrators from Beth Tfiloh Community School, the Jewish Community Center of Greater Baltimore, Hillel of Greater Baltimore, the Beth El Pauline Mash Early Childhood Education Center and Bais Yaakov School for Girls.
Among them, only Beth Tfiloh had a "crisis team" prepared in what Ms. Polin said is a very specialized sort of training for sexual abuse.
"[Child care providers, educators and facilitators] need ongoing training, and it has to be by someone with training in sexual abuse," said Ms. Polin. "It can't be just any therapist because most are not trained in this area and most, without knowing it, could put blame on the victim, the parent, or the teacher. Once [teachers] recognize all these symptoms, the school has to make a system for reporting to someone who is highly trained in sexual abuse, beyond the administration, who may want to keep it hush-hush for the school's reputation."
Zipora Schorr, director of education at Beth Tfiloh, said her school has "a network of support" and the crisis team, and they openly discuss and train staff in sexual abuse awareness.
"Five years ago, I would say there was a huge amount of denial," said Mrs. Schorr. "But with all we've learned and all that has happened in the Jewish and non-Jewish communities, we have a heightened degree of acceptance and awareness. These are the ills of society, and the Jewish community is not immune."
Buddy Sapolsky, executive director of the JCC of Greater Baltimore, said the center checks all references and conducts a criminal background check for every employee. He said the preschool and Camp Milldale work closely with Jewish Family Services' social workers, who train the staff to recognize physical and sexual abuse and are regular consultants.
"Our preschool staff talks to the kids about 'good touch, bad touch,' and the camp people talk to the kids," said Mr. Sapolsky. "But those discussions happen based on the relationship with the kids by the staff. They are not required, but they are encouraged."
But Ms. Polin warns that criminal background checks and references are also not enough. Although she admits there is no foolproof way to catch a potential sex abuser, Ms. Polin maintains that specific training and aggressive reference-checking practices — including utilizing the disclosure of information available since the recent passage of Megan's law opening up access to names and addresses of convicted sex offenders — could minimize the number of predators hired.
Psychological testing, she said, would probably not work since "sociopaths usually pass a lie detector test." And criminal background checks are not a tell-all, since Ms. Polin cites the statistic that pedophiles will act out an average of 118 times before ever being reported.
"Pedophiles often go into service — Girl Scout leaders, rabbis, teachers," said Ms. Polin. "So people who hire need to be trained. They have to listen to words that aren't being said when they're interviewing, and when they check references they have to push for the truth."
Rabbi Naftoli Hexter, middle school principal at Bais Yaakov School for Girls in Owings Mills, admitted that his school does "not often" conduct criminal background checks on staff members. In particular, he said that when a teacher comes from within the local Jewish community, he feels it is "not necessary."
Rabbi Hexter said every potential staff member goes through a series of interviews, and the candidate's references are checked.
"Nowadays, we have to listen because of this new phenomenon," he said. "We don't in any way teach 'good touch, bad touch,' but we constantly meet to discuss, 'Are we preparing the girls properly for whatever they need to be ready for?'"
While sexual abuse is widely unreported and ignored in the general society, Ms. Polin feels the Jewish community is especially inadequately prepared to handle the problem. She said the idea for her organization, the Awareness Center, stemmed from counseling survivors of sexual abuse and the realization that there were no Jewish outlets for victims.
Although there has been little research done within any Jewish community to determine how prevalent this issue is, Ms. Polin said that the number of e-mails she is receiving since opening her Jewish survivors of sexual abuse Web site makes her believe there is "a serious problem."
"[In previous counseling work] people called looking for a rabbi they could go to," said Ms. Polin. "When they called a rabbi, they were told their stories were loshon horah [gossip forbidden by Jewish law] and no one would believe them. They were angry. They were abused, and they were abused again trying to find help. One of the main things they want to know is where was God during this time, and they could only find some missionary who was loving and kind to them."
Even before last month's Beth Tfiloh case, Ellen Marks, director of both Beth El Pauline Mash Early Childhood Education Centers, said she felt that sexual abuse was not "indigenous to any one community." But Mr. Rubin's arrest, she said, still shocked her.
"It's just unconscionable that anybody could violate a child," Ms. Marks said. n 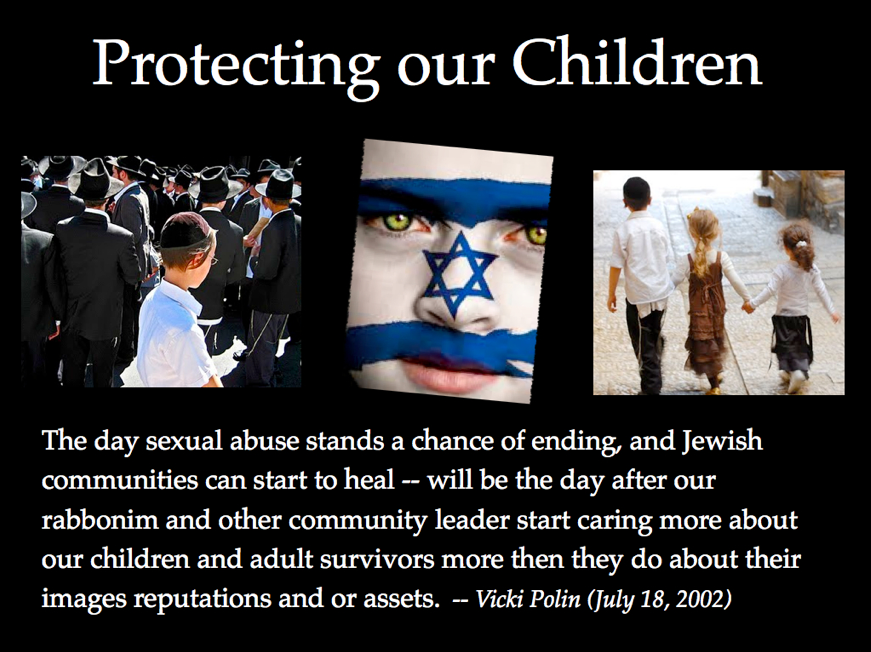 Posted by Vicki Polin at 1:18 PM No comments: