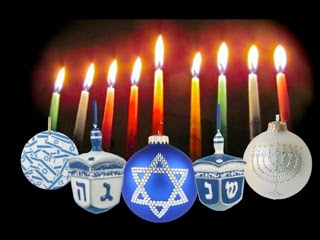 END NOTE: According to Rebbitzen Eilfort an asherah was a tree that represented fertility and goddess worship. That it was an evergreen tree (ie one that didn't die in the winter) would make sense.
There is a Biblical prohibition as well as a positive commandment to not set up and to cut down any trees that represent asherah worship.
Many pagan tribes had a great fear of winter and death (see Beowulf) and created rituals to calm those fears, such as placing evergreen wreaths at doorways etc.
Sources:
Deuteronomy 16:21 states that Hashem hated Asherim whether rendered as poles— "Do not set up any [wooden] Asherah [pole] beside the altar you build to the Lord your God"— or as living trees— "You shall not plant any tree as an Asherah beside the altar of the Lord your God which you shall make". That Asherahs were not always living trees is shown in 1 Kings 14:23: "their asherim , beside every luxuriant tree". Exodus 34:13 states: "Break down their altars, smash their sacred stones and cut down their Asherah poles."

Suggested Films:
"I am a Jew"
Free Will
Posted by Vicki Polin at 10:13 PM No comments:

The right to heal from child sexual abuse

One of the most important aspects of helping a sex crime survivor heal is to encourage them to find ways to feel empowered. This is a critical step because during the crime(s) committed against the survivor, choice was taken away from them. By allowing a survivor to choose what happens to them after the assault and encouraging them to trust their own judgement and make decisions, an individual who was a victim of a sex crime can begin to regain a sense of self. It is for this reason that it is vitally important for someone working with survivors to stay unbiased, neutral and non-manipulative when it comes to survivors choosing NOT to file police reports or having their cases prosecuted.

Over the last few years various individuals have been acting on their own, or created their own organizations, declared that they were experts and knew how to advocate for survivors –– and solve the problem of sex crimes in the chasidic world in Brooklyn. It appears that it has become standard policy to manipulate survivors into making police reports or having the survivor blackmail their offenders into making cash payments to them to avoid potential prosecution.

The mindset of these untrained advocates has been that unless a survivor makes a police reports and have the offenders prosecuted whenever possible, even if it goes against the wish of the survivor -- the survivor can not heal. What ends up happening is that the crime victim ends up feeling re-victimized which may lead to an increase of instances of self-harm, a few suicide attempts and even death.

When asked if survivors should press charges against their offenders? and, If so, when? Psychologist Jim Hopper, who is a clinical instructor in psychology at Harvard Medical School, replied: “It depends on so many factors. What if any relationship does the person who was abused have with the perpetrator now?” “And what about relationships of the abused person's family members and other significant people with the perpetrator, and what if any influence does the perpetrator have in the community?”

The number one concern needs to be to help the survivor heal and make sure they have a strong support system in place, prior to making a police report –– if that’s what they choose to do.

“Because statutes of limitations can differ across states and countries, it's critical to know how long the person has to decide whether or not to press charges.”

“The person may need helping sorting out what they are hoping to achieve [by a licensed mental health professional who specializes in sexual abuse/assault], which may include holding to account, revenge, protecting others -- and it's always a mix of motives. It's also important to take an inventory of the resources one can bring to what could be a long and very difficult process. Internal resources include realistic expectations about he process and outcomes, and one's capacity to deal with major disappointments. External resources include money, competent attorneys, and support from family and friends.”
“Finally," says Hopper, "people should be cautioned that once they go the legal route and involve attorneys (who have a financial motive, even if they also have a strong motive to seek justice), then other potential avenues of healing and justice involving the perpetrator will most likely get shut down, permanently. This may be most important for those whose perpetrators are family members.”

Polly Poskin, who has been the executive director of ICASA (Illinois Coalition Against Sexual Assault) for just over 31 years, and who has authored numerous laws in Illinois, shared her thoughts on this topic:

"It should always be the survivor's choice whether to request that criminal charges be filed against her or his perpetrator. If a survivor chooses to request charges be filed, it is best for the investigation that she or he report sooner than later, but that is often impossible for a victim of child sexual abuse. The perpetrator may be a family member or a friend of the family, or a teacher or her spiritual leader. How would a child challenge such authority? How would a child find his or her own way to a prosecutor's office? Thanks to victim advocates who have gone through the forty hour training and educated policy makers, laws have changed to accommodate the barriers faced by survivors of child sexual abuse. For instance, in Illinois, a survivor of child sexual abuse can request that criminal charges be brought against her perpetrator up to 20 years past the age of majority (20 years of age).


This law recognizes that a child may have to grow into adulthood before she has the physical independence and emotional strength to seek justice for the heinous abuse perpetrated against her as an innocent, dependent child. All survivors have remarkable resilience and awesome courage. They may need supportive loved ones and/or victim advocates to help push open the doors of a once reluctant criminal justice system. We all have an obligation to create access where once denied and promote justice when so well deserved."

The key words in both Hopper’s and Poskin’s responses were that survivors need to be given the choice. Yes, it is important to inform the survivor of all legal remedies available to them, yet victim advocates MUST provide survivors of these options from a nonjudgmental, unbiased perspective.

One of the most important aspects of working with survivors of sex crimes or any form of child abuse is to follow the survivors own agenda. A trained victims advocate will learn how to separate out what they personally want a survivor to do, from what the needs and wants of the individual they are trying help needs and wants to do.
Unfortunately, this is not what always happens with untrained, self-proclaimed victim advocates. There has been case after case in which self-proclaimed advocates have jumped on the bandwagon and inadvertently pressure survivors to follow an agenda that is not in the best interest of the individual survivor.

New York Psychologist, researcher and author, Michael J. Salamon reiterated the views of Dr. Hopper when he stated: “Every survivor comes with their own history and pain. Some survivors are more resilient, others more motivated. The question can and should be answered by each individual survivor after they have explored the benefits and costs to them in their own therapy.”
Attorney Timothy J. Conlon who’s law office is in Providence, Rhode Island shares the views of therapists in stating: “The most difficult cases are those in which no other victims have come forward. Being the first is hard. That said, more often than not even the first finds they are the first of many to come forward, once they find the strength. I suggest having the support of your therapist in making the decision that you are strong enough to hold the perp accountable, and when you are, to do so.”

Author/Psychologist, Mic Hunter shared “I counsel clients that the legal process criminal and civil are very stressful. If going through the courts empowers the client then I am all for it. But if the stress of the court system puts the client at serious risk of suicide or other serious problems then I don't think it is worth that. Also I ask the survivor what he or she hope to get from court proceedings. Inhale found that even some of those who get a settlement from a civil case, or see their perpetrator go to prison are still left dis-satisfied because they wanted the offender to say he or she is sorry, but that doesn't happen.”

Social worker, Jim Austin of Peterborough, Ontario Canada who specializes in working with adult survivors of child sexual abuse, believes that a survivor should only utilize the legal system “when and if they [survivors of child sexual abuse] have the strength to speak their truth. If a Survivor chooses to proceed, they should be sure to have a support network in place. It's going to be a bumpy ride.”

If you are a survivor of a sex crime and live in Brooklyn or any place else, it is imperative that if someone calls themselves an advocate and wants to work with you, be sure this individual is trained and connected to a legitimate rape crisis center affiliated with your states coalition against sexual assault. It is the only way you can be sure that the “advocate” has gone through the proper training program and is being supervised by a trained professional.

If you are a crime victim and feel as if someone is trying to manipulate you or is suggesting that you on your own blackmail your offender into financially compensating you in exchange for not reporting the crime to the police, it is important to report these incidents to your local states attorney’s office. It is important to know that any form of manipulating a crime victim can also be seen as a form of witness tampering, which is a crime and depending on the circumstances the defendant could face jail time. As a survivor you have a right to decide for yourself if and when you make a police report -- let alone have your offender prosecuted. You have a right to heal in what ever manor works best for you.

A Yizkor Prayer for those who were abused as children

You know my heart.
Indeed, You know me better than I know myself, so I turn to You before I rise for Kaddish.
My emotions swirl as I say this prayer. The parent I remember was not kind to me. His/her death left me with a legacy of unhealed wounds, of anger and of dismay that a parent could hurt a child as I was hurt.
I do not want to pretend to love, or to grief that I do not feel, but I do want to do what is right as a Jew and as a child.
Help me, O God, to subdue my bitter emotions that do me no good, and to find that place in myself where happier memories may lie hidden, and where grief for all that could have been, all that should have been, may be calmed by forgiveness, or at least soothed by the passage of time.
I pray that You, who raise up slaves to freedom, will liberate me from the oppression of my hurt and anger, and that You will lead me from this desert to Your holy place. —robert Saks 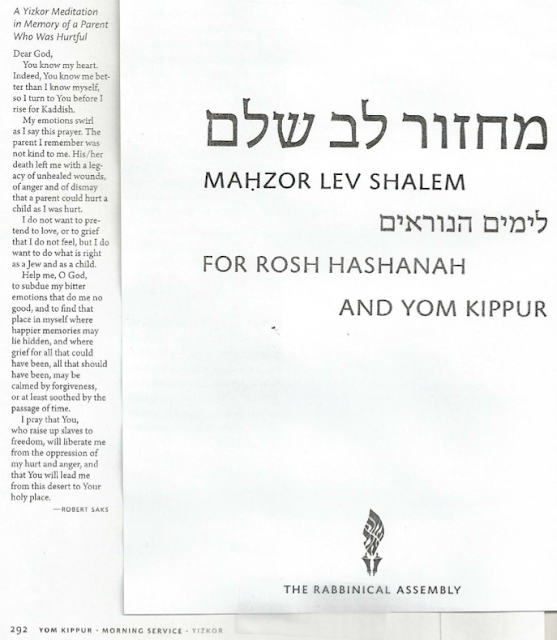 Posted by Vicki Polin at 6:29 AM No comments: