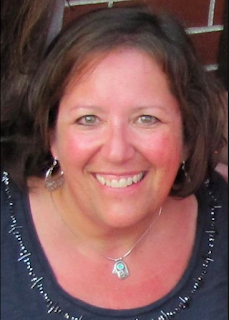 I was just reflecting on my life, and was reminded what impact the concept of being an  independent thinker has had on my life, and how projection of others thoughts and feels has impacted my way of life.

During the 15 years I ran The Awareness Center (which was the international Jewish Coalition Against Sexual Assault) I was accused of being a radical right winged conservative because I assisted survivors from some of the most insulated Jewish communities, and did my best to understand a culture very different then my own.

What I thought was funny about those attacks was the fact that my bio clearly stated that I have an undergraduate degree in feminist studies, along with a masters degree in one of the clinical counseling fields.

At the same time I was being attacked for being a radical conservative, folks from the ultra orthodox Jewish world would scream that I was a self-hating Jew, and called me a feminazi or a crazed liberal feminist — because I would shine a light on what I considered to be sexism and discrimination.  They couldn’t grasp the concept that a woman from a secular background could carry any political weight in their world — and because of that weight I carried I became I a threat they felt needed to be destroyed.

So who am I politically?  I have never been a member of any political party.  My reasoning is that I don’t want to be subjected to “group thought” or peer pressure.

I do my best to examine who supports the causes that are important to me, and vote accordingly.  I wish everyone else in the United States would do the same thing.  Vote with your heart, and not due to what your friends, family and or clergy members tell you to do.  It is important for each of us to be independent thinkers.
Posted by Vicki Polin at 11:47 AM No comments:

Regarding the Kavanaugh hearing

Telling the truth is painful, and unfortunately this means that someone who has been sexually victimized will be brutally attacked by those who support offenders.

Today is one of those days that those who have been victimized will feel a full range of emotions (anger, sadness, depression, etc.).

Many survivors may be experiencing an increase of flashbacks to their own victimization.  Because of this it’s important to check in with each other.  It should be a day of spreading kindness and love.

It’s a day we should all be sending our thoughts and prayers out to Christine Ford and be thankful to her for her heroic efforts.
Posted by Vicki Polin at 9:17 AM No comments:

One example of why it’s complicated to report sex crimes 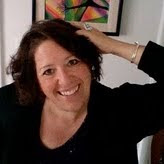 I am someone who has been involved in assisting survivors of sex crimes since 1985.  I can’t even begin to tell you how many survivors I assisted in making police reports, let alone how many times early in my career I testified as an expert witness in cases involving children.  Over the years I’ve also presented educational seminars internationally on the topic of sexual abuse/assault.

Even with all of my education and knowledge, I was sexually assaulted by rabbi/Dr. Jack Nusan Porter back in 2009.  I’m still in shock that it took me 33 days to make a police report.  The reason why it took me so long was the fact that the offender was my rabbis older brother.

I knew if I made a report I would have a great deal to loose that I worked so long to create.  I finally felt I had no other option, since after disclosing to my rabbi what occurred, he was unwilling to insure his older brother would get help.  I also felt as if he was blaming me for the assault.

After I made the report, I was told by my rabbi if I didn’t withdraw it, I would no longer be welcome in his home, synagogue or the community I lived.

A few days later I spoke to a woman I had known for 20 years who ran another non-profit organization.  While on the phone I disclosed to her what happened, without mentioning Porter’s name.

She stopped me mid sentence and asked me if the offenders name was Jack Nusan Porter.  I was left speechless. I forgot that she also resided in the Boston area.  She continued on by sharing that 35 years earlier Jack Nusan Porter had done the same thing to her that he did to me.

During the phone call she shared that the reason Porter was a professor at three different universities, was because he had a long history of assaulting women.  After each occurrence the women would report the assaults to the universities.  No police reports were made, and the universities would handle the allegations internally.  After allegations were made he would be suspended from the university for a time period, so Porter would move on to the next institution until his suspension expired.

After hearing this, I knew I couldn’t cave into the peer pressure, yet by doing so made it dangerous for me to remain in Baltimore.

If you want to know why so many women and me don’t report, is because they have way much more to loose then gain. 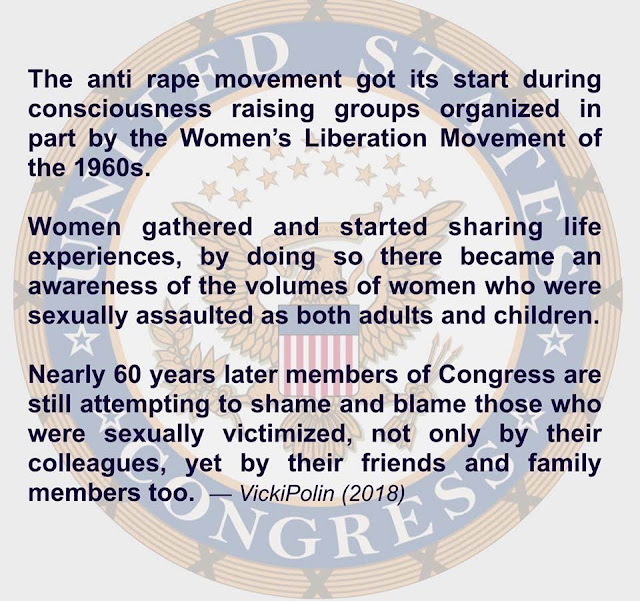 Posted by Vicki Polin at 7:21 PM No comments: 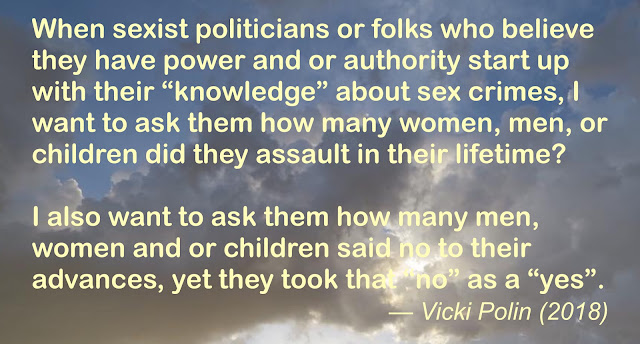 Posted by Vicki Polin at 4:00 PM No comments:

Are there any members of Congress trained to investigate Sex Crimes? 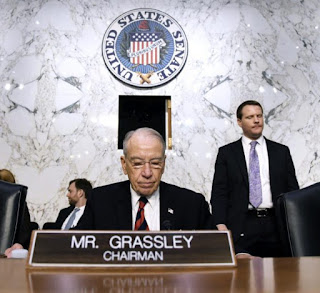 Does anyone know if anyone on the “Republican Party’s” Senate Judiciary Committee has any specialized training in dealing with allegations of sex crimes?

To the best of my knowledge, not one member has an advanced degree in counseling, social work or psychology, let alone a degree in law enforcement.

As a mental health professional who has been involved in the anti rape field for nearly thirty-five years, I am outraged at the behavior of these men who were elected to represent their constituent, and not their own personal egos.

If the Republican Party really wants American citizens to take their actions seriously regarding the accusations against Supreme Court nominee, Brett Kavanaugh who allegedly assaulted Christine Blasey Ford — they will utilize the sex crimes unit of the FBI.

The FBI’s sex crime unit is a group of highly trained law enforcement officials.  They have been trained in gathering forensic evidence, they know how to conduct forensic and victim sensitive interviews.  Members of Congress are NOT!

To allow any committee in Congress to conduct an investigation involving an alleged sex crime is a sham. It’s the same as calling on them to running into a burning building to put out the fire.

I personally believe if the Republican Party’s Senate Judiciary Committee continues to refuse to utilize the expertise of the FBI, then as America. Citizens we all need to be asking the following questions:
Does any members of Congress in the House of Representatives or Senate (Republican and or Democrats) have any specialized training in investigating sex crimes?

Do any members of Congress have specialized training in collecting forensic evidence?

Do any members of Congress have specialized training in conducting forensic and or victim sensitive interviews?

The answer to these questions is NO.  Because of that we all MUST DEMAND that members of Congress refer all cases involving allegations of sex crimes to the FBI.

Like in all allegation of sex crimes, it should be up to law enforcement officials to determine if there is enough evidence for criminal charges to be proceed. It should also be up to legal authorities to determine if a case is valid or not.

I want to encourage every American citizen to call ALL elected officials in their community about the current systems they have in place when allegations are made. Please make it a point to ask:

1. If the elected official  has personally conducted investigations of possible sex crimes themselves?

2. If they have, what process do they go through to make a determination if a case is valid or not?

3. If the elected official determined the allegations are valid:

a) What happens to the alleged offender?

b) What happens to the alleged survivor?

4 If the elected official determined the allegations were not valid:

a) What happens to the alleged offender?

b) What happens to the alleged survivor?

If elected officials are like other institutional leaders, they will say that “they can look in the eyes of someone making the accusations”, and or they “can tell if they are telling the truth or not”.  Most elected officials will also disclose that they have determined most cases were not valid by utilizing this method.

There have also been many cases in history where an elected official will say that "there was no need to conduct an investigation." The elected official would explain that they "personally know the accused individual", and basically because the alleged offender is a friend, "the allegations are false."

Last night last night I posted the following meme to two Facebook groups I run.  The meme is a quote by Joseph Goebbels and his views in how to control the masses by controlling the news media.

One group is to combat antisemitism, the other is group for feminist over forty.  This morning I learned that I was being censored.  The image was removed and that my Facebook page was shutdown for 24 hours as punishment.

If anyone knows how to fight this, please let me know.  There is no phone number to call or anyway to contact customer service or what ever it’s called. 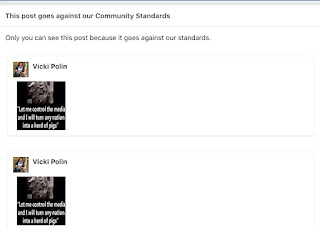 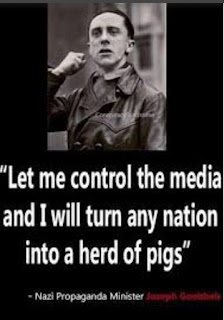 High Holidays and being a Stalking Survivor

I’m feeling the need to say this publicly.


With all the ugliness that occurred during  the years of running The Awareness Center (being stalked, harassed, belittled, spit at, having my home broken into, being assaulted, hit and run car accidents, etc.), it makes it difficult to want to walk into a synagogue for the high holidays.

I’m a Jew, could never be anything else. Yet the hate thrown my way for nearly 20 years has had its impact on me.

I wish there was a synagogue created for survivors of the backlash of being victimized for speaking out against sex crimes and other criminal behaviors within my faith.


I’ve included the link below for those of you who are unaware of the work I used to do.

A Thought About Father’s Day

Forgiveness is not mandatory for survivors of child abuse within a home to heal.

I don't like the term "forgive or forgiveness" when it comes to these sorts of crimes (physical, emotional and sexual abuse).

I personally have acceptance for who my father is, what he did, and who he became over the last forty years that I have been apart from my family.

I also find it important to acknowledge my thoughts and feelings on Father's Day, especially  when friends post photos of their loving dads.

It's important to let others who were abused in their homes to know they are not alone, and their thoughts and feelings are valid.

It's also important to remind others, that not everyone comes from loving homes, and that holidays, like Father's Day and Mother's Day could be painful to their friends, other family members and co-workers.
Posted by Vicki Polin at 12:21 PM No comments: