Posted by Vicki Polin at 4:18 PM No comments: 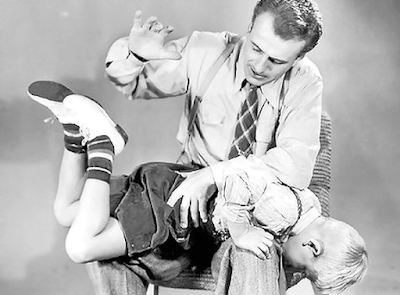 USA Today recently published an article stating that one of the few things that America's top business executives have in common is that almost all of them were regularly spanked, paddled, belted, switched, or swatted when they misbehaved as children. The report also stated that both male and female executives were spanked at just about the same rate.

The tone of the article makes one wonder if the report's logic seems to be that being spanked as a child somehow helped the CEOs achieve their positions. One must also wonder, however, how much better the CEOs would be--as people as well as managers and achievers--had they NOT been spanked . . .

Maintaining the same strange sort of logic presented by the article, one has to wonder if these same CEO's utilize corporal punishment as a way to keep their employees productive? If not, perhaps they should explain why? If spanking their employees to improve discipline isn't something they endorse, how do they explain spanking children, who are young, physically smaller, dependent, vulnerable, and with no recourse of a grievance process?

University of New Hampshire sociology professor Dr Murray Straus said: "Evidence points to corporal punishment as detrimental. If some spanked children grow up to be successful, even billionaires, it's like saying, go ahead and smoke because two-thirds of smokers don't get lung cancer."

Research shows that spanking is correlated with later antisocial behavior, and that children who are spanked are much more likely to be aggressive to peers at school.

The use of corporal punishment all too often teaches a child to resolve problems using violence. It also can lead to depression, low self-esteem, and problems with self-worth. There are nonviolent techniques parents can learn to discipline their children, teach them right from wrong, and help them acquire focus and self-discipline. Today's parents would do well to take time to learn nonviolent ways to discipline their children, instead of repeating what they often endured themselves as children.

Corporal punishment against a child is wrong. Before you hit a child, stop and think: how did you feel when your parents used it on you? How would you feel if your neighbor or a stranger on the street struck your child in a similar way?

Children need direction and boundaries, but if we cannot muster self-control, if we cannot utilize nonviolent ways to teach them, how can we expect them to do so?

Considering the harm caused by the use of any form of corporal punishment against a child, The Awareness Center, Inc. advocates against it.
Posted by Vicki Polin at 4:18 PM No comments: