When someone is a survivor of sexual violence (incest, sexual abuse, sexual assault, professional sexual misconduct, clergy sexual abuse) there are certain types of behaviors (symptomology) that they may display, especially when they are under a great deal of pressure. The behaviors are extremely common for someone who is experiencing rape trauma syndrome (which is a form of Post Traumatic Stress Disorder).
One of the things that helps most survivors is when PTSD symptoms pop out, to take a step back, and regroup. If you don't do this, then you remain in the "victim" role, and healing can NEVER take place.
It's vitally important for a survivor involved in a court case to take as many breaks as possible from following what's happening in the news and or on blogs.  Remaining cool, calm and collected will help your court case.
Reading articles about a case your involved with, and also reading blog entries can trigger "anyone" to say things and behave in ways that would not normally occur. Please, if you or someone you know is a survivor of a sex crime and involved in a court case, please help them by keeping them off of blogs that debate their case, and also DO NOT baiting them into discussions.
I want to urge survivors of all cases NOT to read these types of blogs. If a survivor feels they need to, it should only be done when they are with their rape counselor and or a trusted friend.
Posted by Vicki Polin at 4:43 PM No comments:

Is Gary Rosenblatt reinventing history when it comes to the case of Rabbi Mordechai Gafni?

Early in 2003, while The Awareness Center, Inc. was in its infancy, several orthodox rabbis (who had a connection with the Rabbinic Council of America and Agudath Israel) started calling to request our organization to do something about Marc Gafni (AKA: Mordechai Winiarz). In order to comply with wishes of the rabbonim, our board and volunteers attempted to track down three known survivors of this alleged sex offender.


We had very little difficulties tracking down the second and third survivors, yet had trouble locating the first. Gary Rosenblatt was the link to finding the first survivor.


During our initial conversation with Winiarz/Gafni's first survivor, we learned that several years prior, she had provided Rosenblatt with her story. Back in the 90's Gary had heard rumors and tracked her down. The first survivor stated that she was not seeking an opportunity to share her abuse history, but was convinced by Rosenblatt that sharing the story might spare future women the pain of abuse at Winiarz/ Gafni's hands.


This survivor shared every painful detail with Gary Rosenblatt. Gary promised that he would publish a story right away. Years went by, there was no further contact and a story was never published. The survivor felt exploited and betrayed.

In 2004 finally Gary Rosenblatt reestablished contact with the first survivor, providing her with the contact information for The Awareness Center. The survivor was apprehensive, yet followed through and made the initial call.

I'll never forget the day Survivors two and three communicated with the first survivor. It was amazing to watch; a day filled with old terror and pain transforming into tears of healing, joy and empowerment.

Gary had ample information and factual content from highly respected rabbis and members of the community. The original story Gary wrote was to be published in the spring of 2004, yet nothing happened. Every week Mr. Rosenblatt told the survivors it would be published the following week, yet nothing happened. It wasn't until September 24, 2004, that an extremely watered down version of what was originally written was published.

In Gary Rosenblatt's most recent article "Deconstructing The Gafni Case" he wrote:


"They felt they were the victims, that they had suffered enough and did not want to go through a public scrutiny of past abuses and humiliations. His former wives and the other women had new lives to live and reputations to protect."

The problem with this statement is; Gary ceases to mention that in the code of journalistic ethics created by the US department of Justice, one should never publish the names of victims of sex crimes. Three women spoke directly to Rosenblatt with the understanding that thier names would not be used, all of whom were quoted in his original article. It is common journalistic practice to have unnamed sources. Remember Watergate?

Rosenblatt continued:
"But for a journalist probing these accusations and knowing that the resulting expose could destroy the subject's career, professional standards require offering up real people and real names to make those charges. That is why I spent three years on the Gafni trail, interviewing dozens of people about the allegations of sexual misbehavior, before publishing anything. And at that point, in September 2004, I wrote an opinion column rather than a news story because I still did not have anyone with firsthand experience of abuse speaking on the record."

"And I offered up Gafni's denials, and other rabbis defending him. They said that even if these things had happened, it was a long time ago and he had done teshuva (repentance). . . I think I should have written at the time that I found the women far more credible than Gafni. . . One thinks I should have acted on my instincts and been tougher on Gafni, even though I had no firsthand accounts on the record. Another said I was right to have held out for on-the-record attribution."

The survivor who was thirteen at the time of her abuse stated that it wasn't until years after her initial contact with Mr. Rosenblatt that he connected her with The Awareness Center. The survivor had already given a detailed account of her sexual assault directly to Rosenblatt, yet she requested that her name be withheld from the story. From the point this survivor contacted The Awareness Center, it was another six months before Gary's watered down article was published. He promised the survivor years before that he would publish the story the week following the initial interview, yet nothing ever happened.

Back in 2001, survivor number one received a telephone call from Winiarz/Gafni supporter Naomi Mark, ACSW. Naomi's goal was for a survivor of childhood sexual abuse to meet with her offender. Naomi told this survivor that Marc Winiarz/Gafni wanted to make amends. She told the survivor that Mordechai Winiarz/Gafni had wrote a letter stating: "he thought the survivor was hurting because he ended their relationship instead of marrying her". He wanted to apologize for "breaking her heart."

The survivor told Ms. Mark that she would not meet with the man who raped her. The survivor disclosed that she let Naomi Mark know that "the relationship" Winiarz/Gafni was referring to should be called RAPE. A far cry from what Winiarz/Gafni called a "heartache, or a fallen romance."

It appears Gary Rosenblatt's attempt to re-create history has been influenced by his long time friend, Rabbi Saul Berman -- who to this day is believed to be a defender of Mordechai Gafni.

If Mordechai Winiarz/Gafni has done teshuva, why has he not contacted the other women whom he victimized? Why didn't he ever offer to pay for the pain and suffering all three women endured because of his offenses?

Once again Rosenblatt's affiliation with Rabbi Saul Berman influenced his ability to get the facts straight. Gary Rosenblatt had firsthand accounts. He spoke to three women who were sexually victimized by Mordechai Winiarz (AKA: Marc Gafni). Two survivors had sexual contact; the third was a survivor of inappropriate sexual advances by an orthodox rabbi, who was also a married man.

Gary Rosenblatt spoke to numerous rabbis and other credible individuals who backed the survivor's stories. What more evidence did he need?

If Rosenblatt really wants to make amends to the survivors of Winiarz/ Gafni, he should put an advertisement in the New York Jewish Week calling for the extradition of Mordechai Winiarz/Gafni, and have all those who have blindly supported Winiarz/Gafni sign it.
________________

NOTE: Since writing this piece many years ago, The Awareness Center had learned that Naomi Mark's brother  Jonathan Mark, who was and still is the associate editor of the New York Jewish Week.
Posted by Vicki Polin at 5:35 PM No comments:

By Vicki Polin, Michael J. Salamon and Na'ama Yehuda
(originally published by The Awareness Center in 2006) 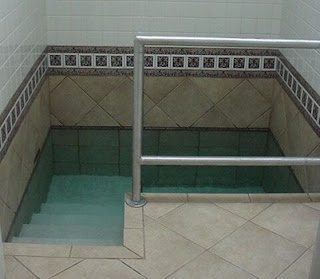 Background Information:
The "Mikvah" is a ritual pool of water, used for the purpose of attaining ritual purity and is used in Jewish communities internationally, including those located in Skokie and the Chicagoland area.

Immersion in a Mikvah is performed for the following main purposes:
the ritual act that divides two periods of time - the period of separation when marital relations are forbidden, because the wife is in the state of "niddah," and the period of union when such relations are not only permissible but regarded as essential to a healthy marriage.

The laws of purity and impurity apply to both men and women. In ancient times when the Temple stood in Jerusalem it was required of everyone to be pure prior to entering the Temple or when eating holy foods. Therefore, both men and women (married and single) would use the Mikvah regularly—if they wished to enter the Temple. During excavations at Masada a mikveh was found. During excavations in Jerusalem there even were mikvah’s found in privately owned homes.

The use of the Mikvah is a vitally important aspect of the Torah observant lifestyle and something that is extremely sacred. In the Hassidic community there is a custom of both men and boys going to the mikvah every day, especially prior to Shabbat and holidays. Unfortunately, there have been reports of boys being molested at a mikvah. For this reason The Awareness Center, Inc. is suggesting that the following five basic protocols be adopted by all communities as an attempt of preventing one more child from being harmed. 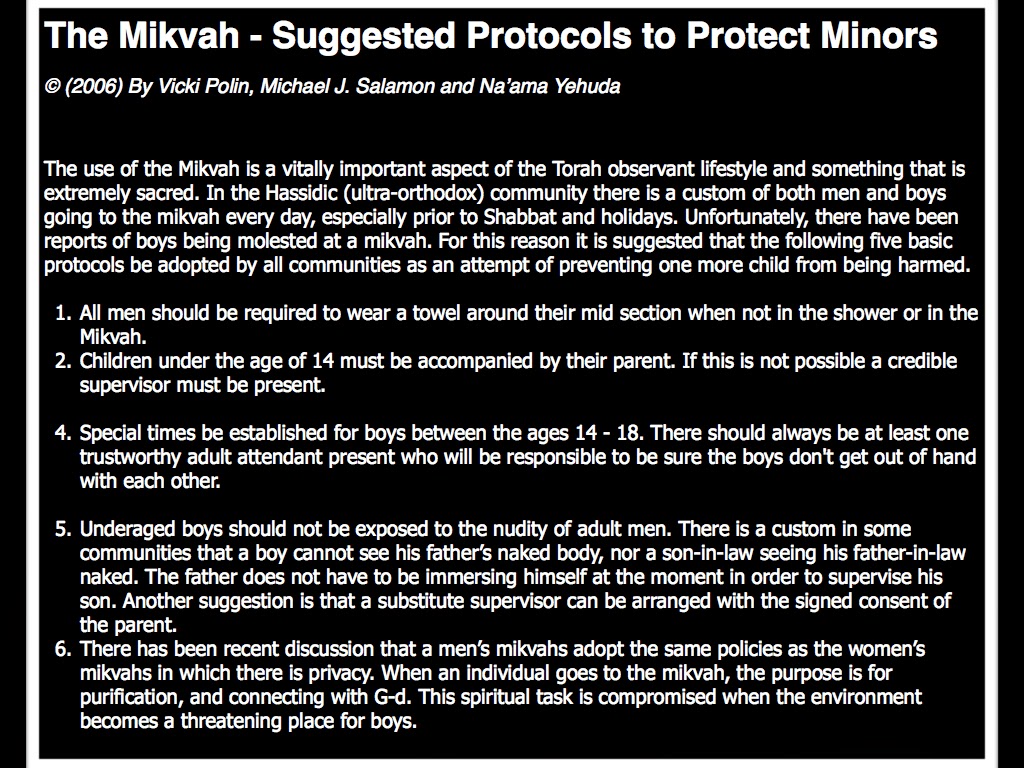 Posted by Vicki Polin at 4:44 PM No comments: