In Honor of Eric H. Erikson 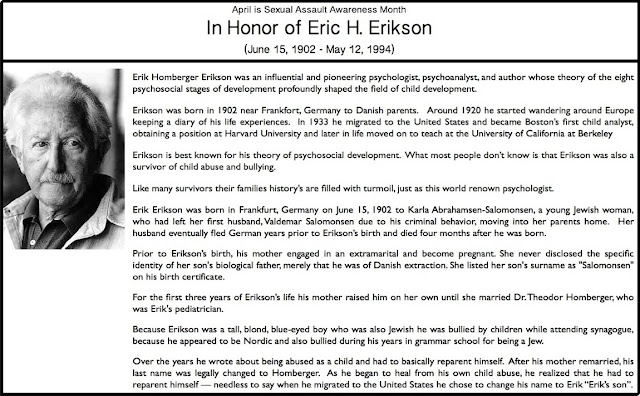 Posted by Vicki Polin at 7:13 PM No comments:

By Vicki Polin
Originally published by The Examiner on July 10, 2013

Does Rabbi Mark Dratch really practice what he preaches? Rumor has it he does not make hotline reports when he suspects child abuse, instead he investigates cases on his own. Rabbi Dratch speaking at a conference in Chicago (Oct. 2010) 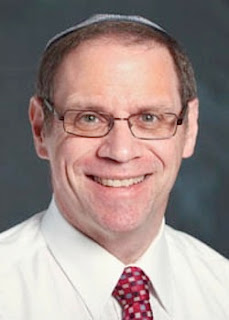 Yesterday the New York Daily News published the article “Yeshiva University High School former students file $380 million sex abuse law suit” by former students who were allegedly sexually abuse by both Rabbis George Finkelstein and Macy Gordon. This is just two of dozens of cases in which Yeshiva University (YU) attempted to cover up sex crimes over the course of several decades.

I’ll admit I have my own personal biases regarding YU due to the degree of harassment, bullying and attempts at extortion I have personally experienced by various rabbonim and community leaders who have ties to this highly respected establishment. It appears the goal of both the RCA and YU has always been to distract from the real issues –– that sex crimes occur within their systems –– by discrediting and silencing both the survivors of sex crimes and those working with them.

Nearly fifteen years ago The Awareness Center (the international Jewish Coalition Against Sexual Assault) was founded and has been a pioneering force in the Jewish anti-rape movement ever since. They were also the first Jewish group to publish a Jewish sex offenders registry of both alleged and convicted sex offenders.

The flack against The Awareness Center began back in 2004 after the case of Rabbi Marc Gafni (AKA: Mordechai Winarz, Mordy Winarz) was published.

It was at this time that attempts by highly respected rabbis and community leaders who were associated with both Yeshiva University (YU) and the Rabbinical Council of America (RCA) would do anything possible to protect this confessed sexual predator. The question has never been answered why Mordy Winarz was so important to them.

During The Awareness Center early years, Rabbi Yosef Blau, Senior Mashgiach Ruchani (head spiritual advisory) at Yeshiva University’s rabbinical school asked to be on their executive board and then served as the organizations Vice President.

At Rabbi Blau’s urging, Rabbi Mark Dratch became a member of The Awareness Center’s international advisory board. Mark Dratch is a son-in-law of Rabbi Norman Lamm (the past chancellor and head spiritual advisor at YU). Dratch was also the chair of the Rabbinical Council of America’s Task Force on Rabbinic Improprieties.

Rabbi Dratch had also been working in the Jewish domestic violence movements many years, ever since his sister-in-law was involved in an ugly divorce from Rabbi Simcha Weinberg.

For several months Rabbi Dratch supported the idea of The Awareness Center’s sex offender’s registry and verbalized his admiration of this list at the 2004 -JOFA conference (Jewish Orthodox Feminist Alliance).

Late in 2004 the ties between The Awareness Center and Rabbi Dratch began to crumble. The alliance started to deteriorate after the RCA publicly published its first draft of protocols in dealing with allegations of sexual predators –– and then completely tore apart after The Awareness Center refused to take down the information they had on Rabbi Marc Gafni (AKA: Mordechai Winarz, Mordy Winarz). It was at this moment in time that the war against Jewish activists working with survivors of sex crimes began by Jewish religious leaders.

It is believed to be around this same time that Rabbi Dratch shared confidential information with Rabbi Saul Berman regarding members of The Awareness Center’s board and advisory board. Once again the goal was to either have Marc Gafni’s name removed from The Awareness Center’s sex offender’s registry or to destroy anyone’s reputation who stood in their way.

Soon after Rabbi Dratch resigned from The Awareness Center he created his own organization, JSAFE. An organization that has always had strong ties with the Rabbinical Council of America (RCA) and which is loosely associated with Yeshiva University.

Back in 2005, a blog called “Jewish Survivors of Sexual Violence Speak Out” wrote: “Yesterday I picked up a brochure at the Jewish Women International (JWI) conference. I was shocked when I read about a new organization being developed by Rabbi Mark Dratch called JSafe. I think it should be called J-UnSafe.

JSafe's mission and goals are extremely similar to that of The Awareness Center's. I have my concern that Rabbi Mark Dratch and members of the RCA are attempting to kill the messenger.”

Back on November 11, 2004, Rabbi Dratch was interviewed by Luke Ford, and was quoted as saying the following:


"The website and its discussion groups are an invaluable resource for many people. I had been involved at supporting them at one point in time. Vicki Polin has done tremendous work. We had a disagreement about a year ago over some of the articles published on there with regard to accusations made against individuals. Her feeling is that as long as there is an article out there it should always be public. I disagree with that. If there is no substantiation of the allegations after a period of time and the person may be innocent, those articles should not be there. As a result of that, we have parted ways. She remains an important resource for me and I imagine I am an important resource for her.

Posted by Vicki Polin at 6:43 PM No comments: