No Resolution For Jewish Survivors of Sex Crimes

(Article originally published in "The Times of Israel - September 30, 2015)

Over the past thirty years of being involved in the anti-rape movement, I’ve worked with hundreds of survivors of clergy abuse from just about every faith.

Though each religion has its own beliefs and protocols in the way allegations of sex crimes should be handled, there are so many similarities between the various in which these institutions have operated.
Sadly it appears that the status quo has been to cover-up sex crimes after they have been committed, and then to turn around and blame those who have been victimized.

For years many activists have joked, "that it’s almost as if religious leaders of all faiths went to the same school to learn how to mishandle cases involving clergy, along with employees of their religious institutions."

Though each faith might use different terminology in their rationals and religious laws, it all boils down to one thing;  The reputations of their clergy members, community leaders and institutions come first.  Very few really seem to care about the long term effects and ramifications sex crimes plays on those who have been victimized.

I’ve heard it over and over again, from professionals working with survivors of clergy sexual abuse, that it is as if those in affiliated with religious institutions in leadership roles “are nothing more then a part of  the good ole boys club”.  Which makes it appear that they care more about reputations, then about innocent lives of congregants (including men, women and children).

Over the last several weeks, since the first announcement that the Pope Francis was coming to the United States and since he left; I’ve been flooded with emails along with postings on both Facebook and Twitter regarding the Catholic churches inaction when it came to cases of clergy sexual abuse, along with complaints regarding the continued mishandling of more recent cases. 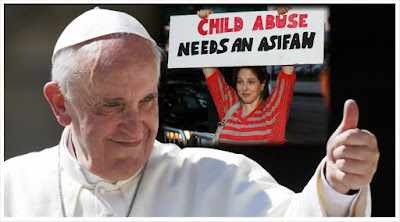 Every time I received one of these announcements regarding the Pope, I can't help but to thinking to myself that on some levels my Catholic friends have it so much easier then us Jews.  Within Judaism, there is not one central person in charge of our faith.  Meaning there’s not one person to place the blame.  Instead it feels as if we have zillions of pontiffs.  Within Judaism, there is no Pope.  Instead each and every rabbi is more or less like the rulers of their own kingdom.

According to years of research on the topic, I’ve learned that there is really no way to “defrock” a rabbi.  In the Jewish Renewal, Reform, Reconstructionist and Conservative movements, receiving rabbinical ordination is like receiving a college degree.  There’s no taking it back.  In the orthodox world, there are some that say that if the rabbi who gave the ordination takes it back, then the person is no longer considered ordained.  The problem with this is that often rabbis receive multiple ordinations, meaning various rabbonim would have to remove their smichas.  Another issue is the fact that if the ordinating rabbi is deceased, there’s nothing one can do to remove the ordination.

Some believe that if a rabbi is a member of a rabbinical organization it provides some sort of protection for the rabbis followers.  The truth is that it does not.  The worst thing that can happen is that the alleged offender might have their membership terminated.  The alleged offender is still allowed to call themselves rabbi.

Over the years we have seen rabbis or other community members who have been accused of a sex crime chased out of town after committing heinous acts; yet allowed to move on to a new, unsuspecting community –– where the alleged offender can have free reign in victimizing more men, women and or children.

Another issue we have seen happen time after time is that an alleged or convicted sex offender will hop from one movement of Judaism to another to avoid suspicion, without any sort of notification to other branches of Judaism, which offers the alleged assailant the illusion they can roam free to offend again.

Unfortunately, to date there are no solution to any of these issues –– leaving our communities vulnerable.

(Originally published by The Times of Israel on September 30, 2015)
Posted by Vicki Polin at 11:48 AM No comments: