Are Some Ultra-Orthodox Jewish Kiruv Organizations Feeder Groups For Cults? 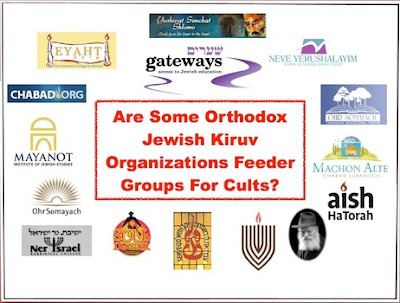 The majority of Shabbatons offered by non-cult like groups are amazing experiences. Over the years I’ve been to a few that were both cult and non-cult like. Going to a legitimate shabbaton is like going to a “spa for your soul”. A shabbaton is a weekend retreat over the Jewish sabbath, created for those who are wishing to learn more about Torah based Judaism.

I’ll admit that during cult like shabbatons I was aware of some of the manipulative techniques that were being utilized, yet I found myself dismissing my thoughts and feelings about what was being said and done. I was aware that these cult-like groups were using shabbos as a way to lure in secular Jews for their own personal gain. The truth is there’s a lot of money to be made off of someone becoming orthodox. Between the cost of providing the needed education, the purchases to create a kosher home and maintaining it, the purchase of religious artifacts, and –– a lot of costs are involved. As well, if someone is a devotee, they will show their thanks by making donations to the cult-like institution for years to come.

The typical Shabbaton in the ultra-orthodox world is often stacked with volunteers who’s job is to befriend newcomers. During this process the “volunteers” start the love bombing techniques, in hopes of making the individual feel how extremely important their neshema (soul) is to the Jewish people –– along with teaching a very skewed version of Judaism. During conversations, the volunteer will also learn as much as they can about their new “unaffiliated Jewish friend” –– and then report back this information to the retreat’s organizers.

Like any other type of conference, participants exchange phone numbers for the purpose of networking. Sharing this type of information at a cult like Shabbaton allows those involved in the cult based kiruv world to secure contact information of unaffiliated Jews. This is vitally important so they can continue with the love bombing process in the guise of assisting them in their personal spiritual journey. Like most other large cult like groups, ultra-orthodox kiruv workers have an international network so that they can connect unaffiliated Jews with other kiruv workers who may live closer. They also maintain an online database so that they can share information about individual baal teshuva’s (returnee to the Jewish orthodox lifestyle) so that the love bombing process can continue.

It is quite normal for the organizers of the weekend retreats (in both cult and non-cult like shabbatons), to arrange for the potential baal teshuva to have shabbos meals back in their home communities as a way to introduce them to new orthodox friends. According to Halacha (Jewish law), Jews are not allowed to drive during shabbos –– because of this, it is not uncommon for the new orthodox friends to encourage the newbies to stay overnight, in hopes of preventing the unaffiliated Jew from violating shabbos.

As time progresses and the newbie in the orthodox world gets more involved, they tend to spend more time within an eruv (orthodox Jewish community). This is especially true as they make the switch from the secular lifestyle into a Torah observant Jew.

Friends and family members of the baal teshuva will complain that they no longer seem to have time for them. This is because the new devotee is involved with learning Torah and other activities that occur within the orthodox world. Depending on the group a baal teshuva gets involved with, it may be encouraged that they spend less time in attending family functions. This is a red flag that the group may be considered cultish, especially if the newbies rabbi doesn’t help them to find kosher ways to be involved with their families and secular friends.

Keeping kosher and shabbos are the key components of becoming an orthodox Jew, both of which are beautiful customs and traditions. They are also practices that by nature separates a person from the life they knew prior to becoming religious. In the mainstream orthodox world, kiruv workers will work with the baal teshuva in finding ways to include their family members and old friends in their lives. This is not necessarily true in the cult like groups. Another interesting aspect of a cult-like community, is that when working with a baal teshuva, they will keep the new member so busy with activities that they have no time to be with old friends, family members or to think deeply about their involvement or activities that might lead them away from the cult experience. They do their best to control the contact and relationships of their members.

The longer a baal teshuva is enmeshed with or lives within a cult like existence, the more likely it is that the individual stops utilizing their ability to think for themselves –– let alone have their reasoning processes interrupted. The baal teshuva will start to find ways of rationalizing the need for their rabbonim to have influence on just about everything they do, say and think.

Another technique utilized by cult like communities is that they find ways to cut the baal teshuva off from the rest of the world. Early on they being to talk about the evil influence of television, going to the movies, listening to secular radio stations or reading newspapers that have not been approved by their rabbis. To insure that community members obey the rules set up by the rabbonim, there’s very common practice within the cult like Jewish world to report any indiscretions, no matter how minor made by a group member to the groups leader(s).

When this occurs, the individual member is either called in for a special meeting or the situation will be discussed in a shiur (Torah class), or during a shabbos sermon -- without naming the individual, yet with enough information that most people can figure out who the rabbi is discussing.

When a member of an ultra-orthodox cult like group world questions the authority of a rabbi, does not change behavior or disobeys a rabbinic decrees -- they end up getting shunned by the community. Not only will other members be banned from talking or associating with the accused, family members including their children will also effected. Children of the banned cult-member will no longer be allowed to play other children -- and often are no longer allowed to attend the Jewish parochial school set up within the given community.

Walking away from an ultra-orthodox Jewish fundamentalist group is not unlike leaving any other cult-like community. Doing so means leaving just about everyone and everything you know and love behind. “Religious friends” may no longer be there for you, cult involved family members may shun you. Several ex-baal teshuva’s have reported they were no longer allowed to shop at stores within the communities they once called home.

Going back to your old life may also be difficult, especially if you’ve been away for any length of time. Even though your experiences in the secular world were put on hold, most people and things have moved on. One ex-Baal Teshuva reported that it was like living in the movie “Back to the Future” or the book “Rip Van Winkel”. In their minds they wanted everything to be exactly like it was prior to entering the cult-like world, yet everyone and everything moved on. Most people in the secular world do not understand the ultra-orthodox world. What rabbis and community members of the chasidic world found important -- the secular world does not.

It takes time and patience to fit back in. It is an adjustment to think for one's self and to sort through the experiences that led to joining and the leaving this ultra orthodox world. Many experience difficulties with readjusting to their previous life. Many may benefit finding a therapist who understands and has experience working with individuals who have lived within cults, fundamentalist and or extremist groups.
Posted by Vicki Polin at 6:47 PM No comments: